Kampala, August 13, 2015.  Pepsi Cola has today committed Shs10 million to the successful staging of this year’s Pepsi Boys Schools Cricket Week that will run from August 15th to 21st, 2015 at various ovals.

Mr Innocent Tibayeita, the head of sales and marketing at Crown Beverages Limited, the bottlers of Pepsi, said the sponsorship will cover, among other things, refreshments, publicity, transport, trophies, accommodation and meals.

“Pepsi has decided to sponsor the upcoming cricket week for boys secondary schools with a Shs10 million package as a sign of its continued commitment to developing the sport in Uganda. The sport also offers us an opportunity to showcase our thematic campaign of Live For Now,” said Mr Tibayeita.

“As Pepsi Cola we know that youth want to grab as many fun, active, exciting and spontaneous, social opportunities as they can. They are ready for the fun, excitement and entertainment and they want all this, now. It’s for this reason that we are positioning Pepsi Cola as the catalyst for the Now moments,” he added at the unveiling of the sponsorship package at Lugogo in Kampala.

According to Uganda Cricket Association (UCA), 12 schools picked from the regional qualifiers will be joined by an invitational side from Rwanda to take part in the tournament

According to the Mr Justine Ligyalingi, the CEO UCA, this tournament, other than promoting development of the sport locally, is critical in identifying talent at various competition levels, including the national schools team.

“This competition provides the Association with a platform to select the squad of Under 19 players that shall be involved in the Global Under 19 Qualifiers due to take place in October plus other age group tournaments. We would also like to thank the media for the good coverage of our activities, and looking forward to strengthen this relationship,” Ligyalingi said, adding: “We appreciate Pepsi’s contribution today, as well as their past support to the rejuvenation of the game in Uganda.”

This will be the fourth-year running that Pepsi is sponsoring the Boys Schools’ Cricket Week and fans will not only be able to enjoy ice-cold Pepsi Cola sodas but they will get a chance to win lots of prizes during the tournament.

This year’s tournament, according to Mr Ligyalingi, shall run for a whole week with the introduction of the quarter finals and classification games. The fixtures will be released after the draws on Saturday.

During this tournament, the best players shall be selected to form a schools select team that shall travel to Rwanda for a series of build-up games. 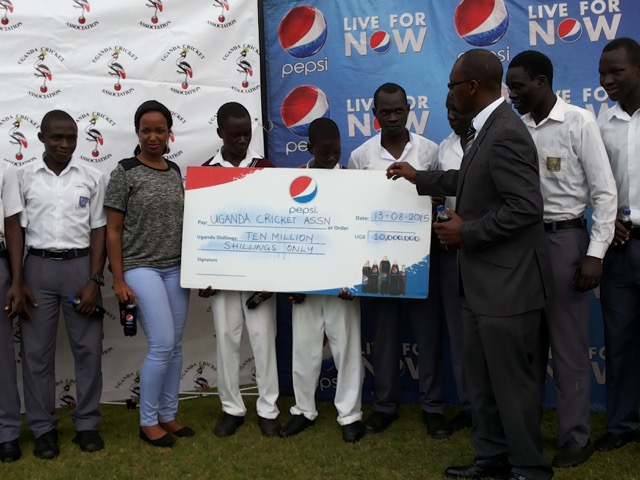