Miami-Dade police told Local 10 that the operation, spotted from the sky at about 5 p.m., was part of a civil case.

Few details were released, but last month, TMZ revealed that Weezy -- aka Dwayne Carter, Jr. -- was being sued by his private jet company for failing to pay a $55,000-per-month lease on his Gulfstream II. A judge ruled that he'll have to pay $2 million in late fees and court costs. 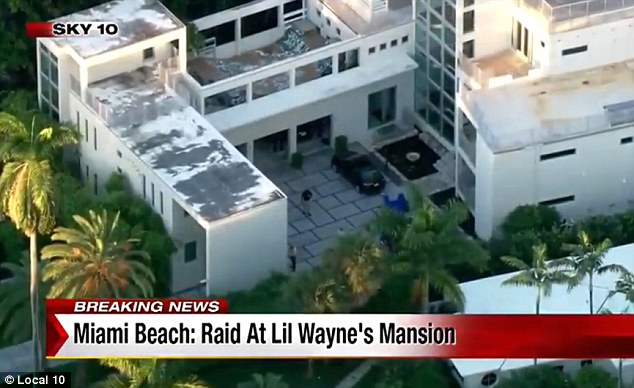 Miami-Dade police didn't immediately return calls for comment, but the Miami New Times confirmed that it was a repossession:

To recover that cash, Signature Group asked [Miami-Dade County Judge Lisa] Walsh to authorize a "break order," basically giving them permission to storm Wayne's house -- with or without permission -- to obtain his assets.

The Signature Group's initial request was denied, because the judge said they hadn't proved he had property inside the $4 million waterfront house.

But, after the Signature Group was able to obtain photos proving that Lil Wayne did have assets inside his mansion -- which is currently up for sale -- a judge signed a new order on Friday authorizing the break-in.

This incident follows a March report about four people being shot inside Lil Wayne’s Miami Beach home which authorities said was all a hoax.

A SWAT team stormed the rapper’s luxury La Gorce Island mansion on a Wednesday afternoon and went from room to room following a tense, two-hour investigation from outside.

“Unfortunately this appears to be a ‘Swatting’ call,” Miami Beach Police tweeted at 2:54 p.m. "MBPD handles all calls of this nature in a serious manner. In this case it appears to have (been) a hoax."

Young Money, the rapper's record label, tweeted that the rapper was not home at the time of the incident and "is okay."