As shocking news broke yesterday night that AK 47 died on his way to Nsambya Hospital where he was being rushed after it emerged that he fainted in a bathroom in Kabalagala at Dejavu bar, alternative sources have also come indicating he was beaten and later went in the lavatory to clean up where he fainted and was found in a critical condition.

According to the news coming in from Kabalagala, Former Goodlyf and Leon Island Crew member Diamond Oscar and one Deejay Bobby are on the run in connection to AK47 death. The source has told Howwe.biz that the two set to make it to Kabalagala Police station for interrogations following the mysterious death of fellow singer AK47. 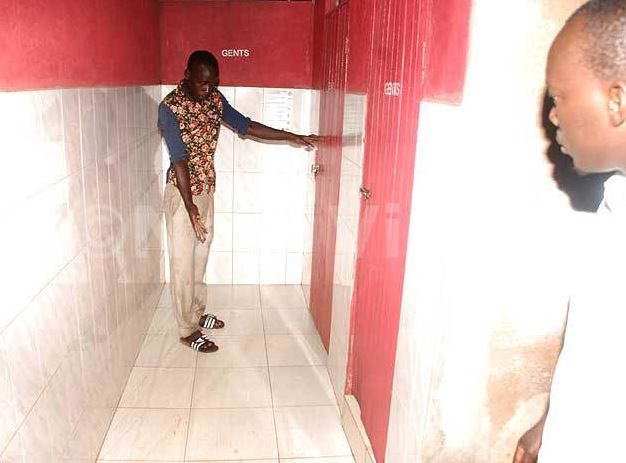 A staff at Dejavu bar shows the spot in the bathrooms where AK47 was found lying? (Photo Credit: Newvision)

Howwe.biz has managed to reach to Kabalagala Police station to follow up this issue, however we have been told to leave Police do its investigation despite the information availed to Police indicating that Diamond Oscar and Deejay Bobby were the last people that the fallen musician was last seen with at Dejavu Bar where the singer collapsed to his death.

Our team has tried to reach out to the two suspected persons for a comment but their contacts were seemingly busy! We can’t confirm this rumour until we get a comment from the two persons in question.

Preliminary police reports have reportedly indicated that AK47 could have possibly been beaten and strangled was discovered with marks in his neck regions, which still leaves room for who actually did the crime.

Meanwhile, Dejavu bar has been closed to allow police investigations.