Trouble? Most likely than not!

The dynamic duo of Radio & Weasel are (as expected) are being slapped with a lawsuit from TNS boss Jeff Kiwa.

On 3rd June. 2016, a cell phone recorded video of the two singers appeared on their official Facebook fan page. The singers appeared in the video alleging that Jeff practices witchcraft and beheads people in ritual practices.

These claims sparked a lot of controversy on social media attracting mixed comments. While most of the comments sided with the singers, other reactions claimed the attack the two were making on Jeff was a stunt to create a distraction from the Tubonga Naawe saga.

In the video, Radio & Weasel insist that Jeff is behind a number of murders and beheadings in ritual sacrifices. All these claims came after an 8 year old boy, Ogema Joel, was beheaded by an 18 year old Jeff impersonator who was a few days later apprehended by the Homicide department of Police and Jeff -- who was allegedly held at Special Investigation Unit (SIU) Kireka -- acquitted of all charges.

Following social media attacks from the duo and singer Pallaso, it has all been a hush-hush in TNS, or it seemed so.

Jeff Kiwa is finally fighting back ... and if Radio & Weasel don't comply, the singers are likely to "face criminal and civil charges at their own cost".

A notice from Muwema & Co. Advocates and Solicitors details Radio's statements translating them into English.

The notice demands that Radio & Weasel take down the video from the Facebook page and simultaneously post a retraction/apology on the page.

It further demands that the singers publish an apology, the text of which the law company will approve in the mainstream print media by Monday 20th June, 2016.

The notice warns that if Radio & Weasel fail to heed to the above demands, the firm has been instructed to commence both criminal and civil action against the two singers.

Things don't look good at Goodlyfe ... since they could end up paying 1 Billion UGX in damages.

See the documents below! 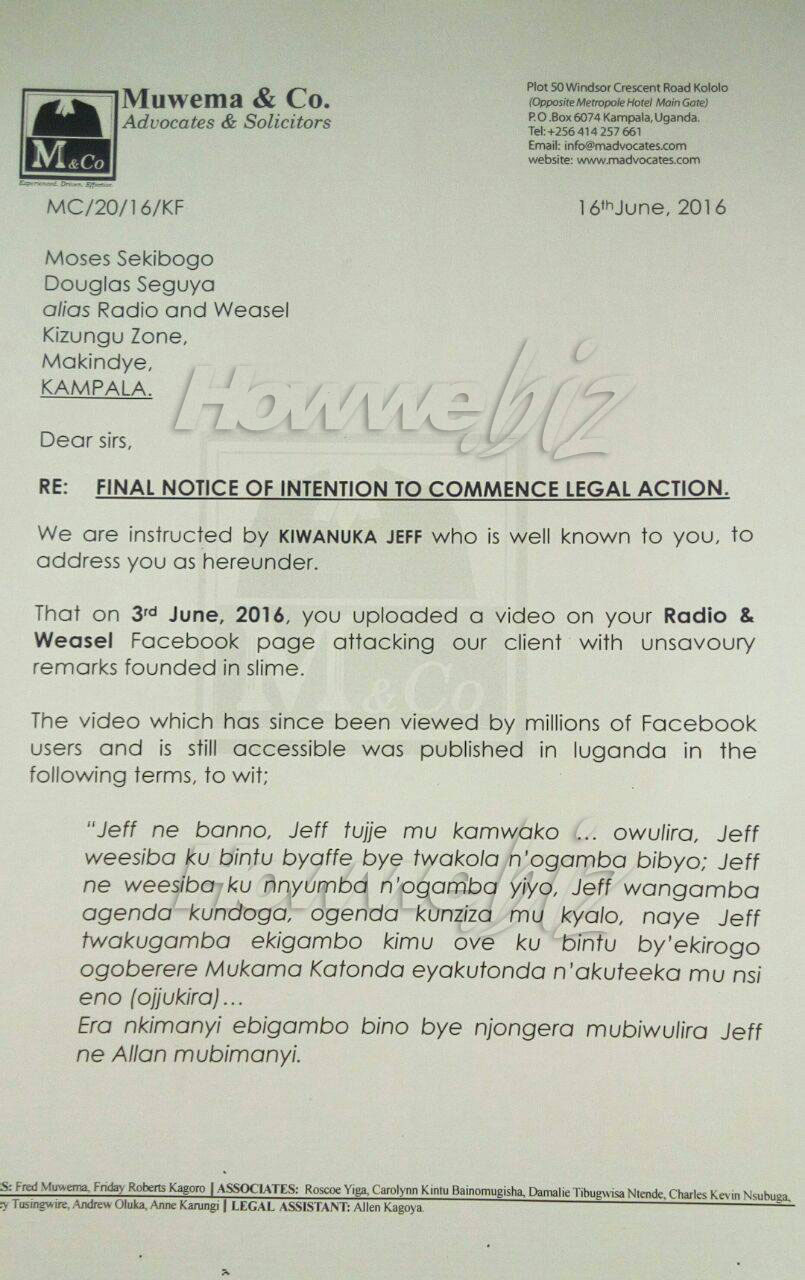 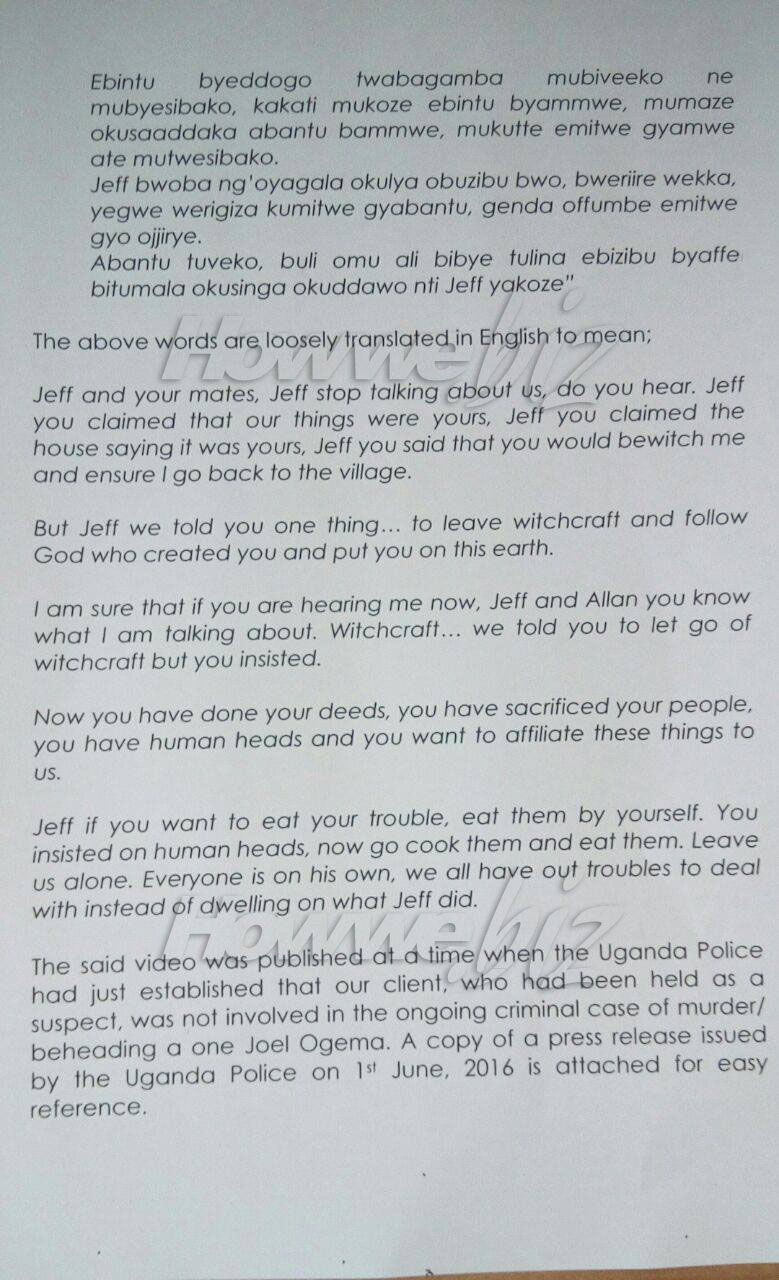 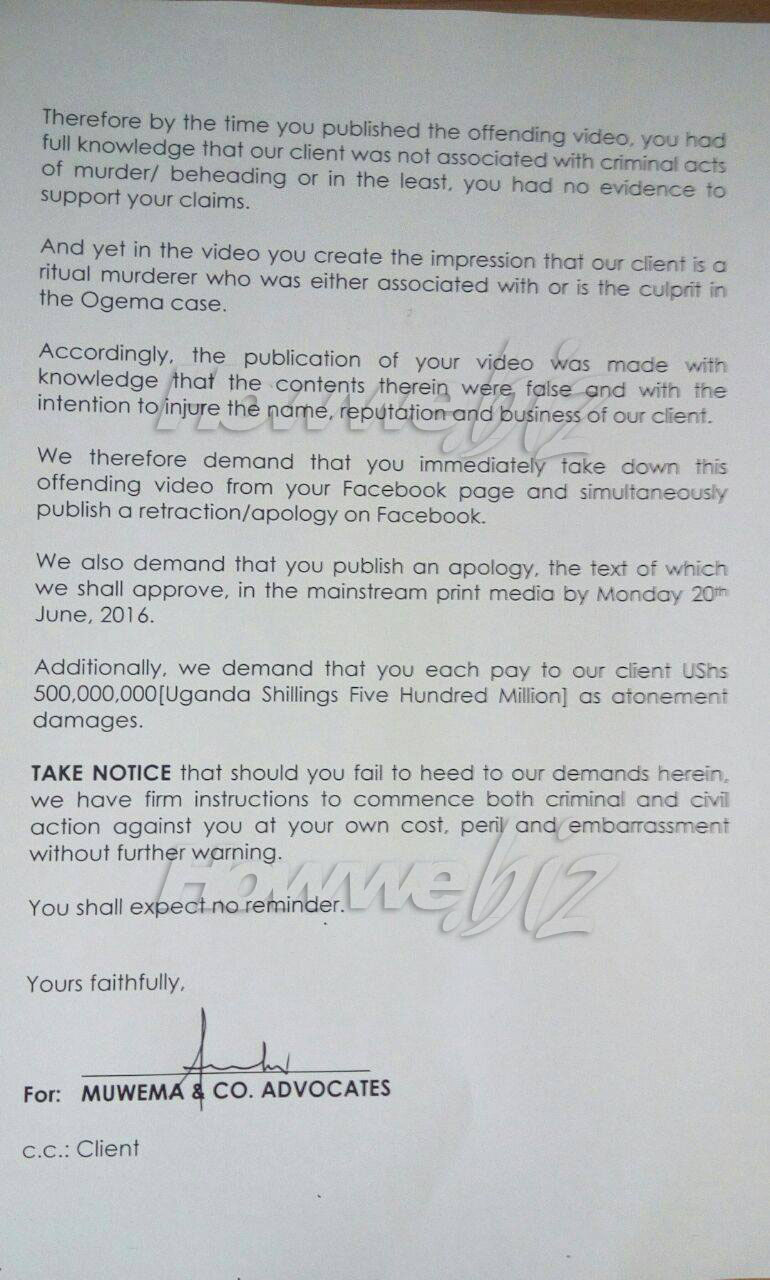 Do you think Jeff is being so harsh to Radio and Weasel with the 1 Billion fine!