Iranian President Hassan Rouhani, who was scheduled to land in France for a state visit on Sunday before going on to Italy but has now reportedly canceled the trip, sent a message to his French counterpart Francois Hollande calling the attacks “crimes against humanity,” the news agencies of both countries reported.

Hollande also received a phone call from U.S. President Barack Obama, who “reiterated the United States’ steadfast, unwavering support for the people of France, our oldest ally and friend.” He also offered any necessary support for the French investigation of the attacks, according to the White House.

Watch the full statement from @POTUS on the attacks in Paris. https://t.co/yQThOvrdxZ

Indian Prime Minister Narendra Modi — currently in the U.K. on a three-day official visit — expressed his condolences on Twitter, as did his British and Canadian counterparts David Cameron and Justin Trudeau respectively. 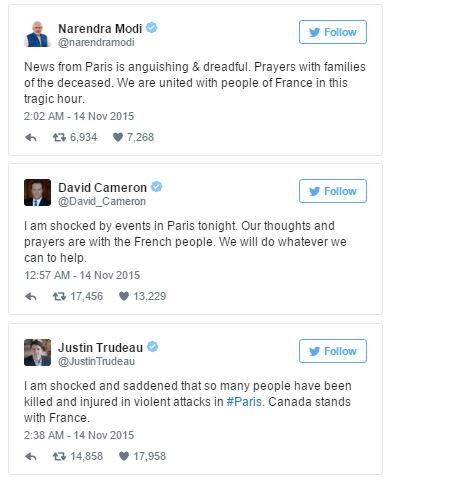 Condolence and support from other global leaders, including those of countries like Saudi Arabia, the United Arab Emirates and Kuwait, continued to pour in during the early hours of Saturday.

I am Beautiful But Unlucky - Sheila Gashumba

I Am Tempted to Do Secular Music Sometimes — Pr Bugembe