In a move to continue its dominance as Uganda’s Smartphone Network, Airtel Uganda has unveiled a one of a kind pocket friendly internet connection device named The Airtel Wingle.

The Airtel Wingle is a 3G Wi-Fi/Internet device that can support up to 10 wireless high speed users or (devices) all connected at the same time. It is a plug and play device which means you don’t have to hustle with configurations.

It can also charge from any power source starting with desktop/laptop to a car charger or even a power bank. “It can be controlled through the Huawei Mobile Wi-Fi App straight on your Smartphone, and uses a standard USB interface,” revealed Charity Winnie Kamusiime, a Digital Marketing Executive at Airtel Uganda.

“The Airtel Wingle is a device fit for this Smartphone generation due to its portability, high signal strength and can be used anywhere any time to connect up to 10 users. We believe that our customers will enjoy using the Airtel Wingle and we shall continue introducing cutting-edge devices and products to enhance the way people communicate in Uganda,” she added.

The Wingle is already on sale at airtel outlets for just shs100, 000. It comes with 1GB of free mobile data for one month. 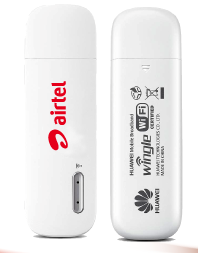 What You Need To Know About INFINIX HOT 7

How To Make Sure Your Data Doesn’t Get Depleted