Klopp is close to agreeing a three-year deal, with negotiations having made significant progress on Tuesday, sources said.

The 48-year-old ended a seven-year stint in charge of Borussia Dortmund in May with the intention of taking a year-long sabbatical from football.

Klopp has not been discouraged by the fact that Liverpool wish to keep their controversial transfer committee in place, sources said.

The committee -- which includes chief executive Ian Ayre, head of recruitment Dave Fallows, chief scout Barry Hunter and technical director Michael Edwards -- has faced heavy criticism over the quality of the signings it has brought in. 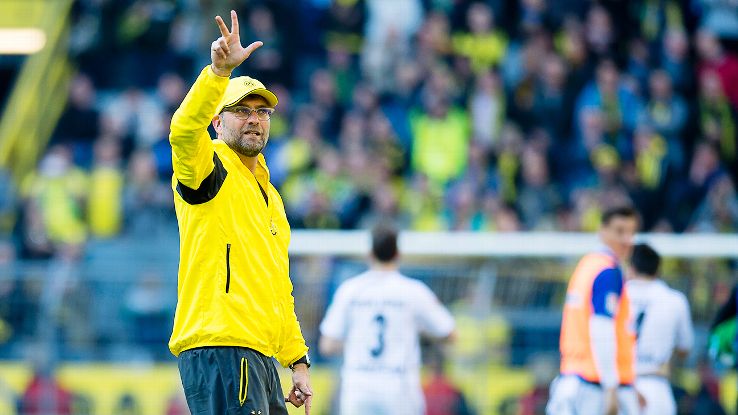 Liverpool spent £291 million on players during Rodgers' three years and four months at the club, without winning any trophies.

Klopp is prepared to work with the committee, although he has reportedly indicated that he wishes to bring in two members of his backroom team at Dortmund -- assistant manager Zeljko Buvac and analyst Peter Krawietz.

It is unclear what repercussions that would have for the futures of current Liverpool assistant manager Sean O'Driscoll and first-team coach Gary McAllister, who only joined the club in July.

Former Liverpool player Robbie Fowler expressed his own interest in a backroom position on Tuesday.

Providing there are no complications during those talks, Klopp is then set to travel to Merseyside, with the aim of confirming his appointment by the end of the week.

Meanwhile, Germany legend Franz Beckenbauer said he believes Klopp is the best choice Liverpool could hope for to succeed Rodgers.

"He is fantastic. He is one of the best coaches I know in the whole world, and he was really a milestone for Borussia Dortmund," Beckenbauer told The Times. "He took over the club and made them into a world-class team. If Liverpool has the chance to sign Jürgen Klopp then they should do it.

"He likes to talk. There are not many coaches left in the world that like to talk so much to the players but he is one of them. Liverpool is also one of the biggest clubs in the world, so Liverpool and Jurgen Klopp is definitely a good combination. He is also a winner."

And Liverpool's former German midfielder Didi Hamann told The Mirror that Klopp has what it takes to be an "immortal" figure at Anfield.

"If he gives himself 12 months to take it all in and understand fully what the club and the fans are all about, then I really do believe he can be an immortal at Liverpool," Hamann said. "Jurgen is a top-class manager, and he has the passion to connect to the people."

"I think Jurgen already knows where Liverpool stand in the game," he said. "I remember he brought Dortmund to Anfield a couple of years ago, and he touched the sign in the tunnel, and then stood looking at the Kop for about 30 seconds.

"He gets it. He had that connection with the fans at Dortmund, and I think he can do it again."