Pallaso has fired back at City stylist Kim Swagga for falling him a cheap money maker. This comes after yesterday's incidence that saw Kim write a stingy post attacking Mayanja family for not respecting the dead. (SINGER AK47).

It is said that Pallaso influenced and organised a birthday party of Late AK 47 and apparently, some people are not happy about it especially Kim.

In defense for his (Pallaso) acts, Pallaso has released a lengthy statement condemning Kim for being arrogant and ignorant. Here is what he says:

Did I throw Akay a birthday before he died ?? Yes !! Read his Instagram post here below and see who threw his his last birthday !! Now I just read Kim No swagger post about me throwing Akays birthday !! First of all Kim No Swagger is nothing but an attention clown !! It's crazy how some Ugandans like this lunatic have chosen to dwell on permanent ignorance !! In Jamaica they celebrate Bob Marleys birthday, In America they celebrate Tupac birthday,Elvis Presly and so many other gone heros!! They release balloons and let them fly off with so many other things on their birthday !! They celebrate their lives and the fact that they have once lived !! Look at the recent one Paul walker .. They find a reason to celebrate his life every day but NO !! in Uganda people like Akay, Paul Kafeero, Menton summer should be dumped off and forgotten, Bob Marleys birthday has become a world event over the years and millions celebrate it all over the world !! You need to travel the world and learn why some people have emerged to be better than us and that might help us live better !! This clown calls my brother his brother but doesn't want no one to celebrate the fact that he lived !! Don't give your clueless opinion on things you have no idea about !! First answer why you have pictures taken with Mubiru !! That's more of your business !! JF Kennedy, Martin Luther King, Malcom X and so many others are celebrated !! for your own Information even Christmas is a celebration of Jesus Birthday !! ‪#‎SMH‬ 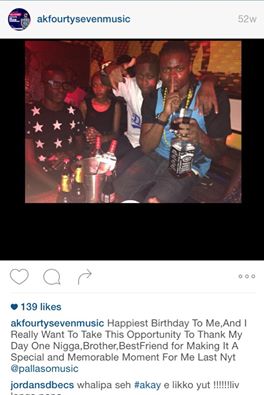