The central Bank of Uganda (BoU) has denied reports that it is hiding Shillings 10 billion in a secret account in Germany. In a press statement issued this morning, BoU Communications Director, Christine Alupo, describes the reports as misrepresentation "of the information that was provided in the testimony by the Bank of Uganda (BoU) before the Parliamentary Committee on Commissions, Statutory Authorities and State Enterprises (COSASE) on August 2, 2017".

On that day BoU officials appeared before COSASE to respond to issues that had been raised by the Auditor General arising from routine end of financial year audits covering three financial years starting from 2013/14 forward. Alupo explains that one of the issues that had been raised pertained to a dormant trust account held in Deutsche Bank in Germany that had not been reflected in the books of the Bank of Uganda.

According to Alupo, BoU in carrying out its role as Banker to Government, opens and executes authorized transactions on Government accounts both domestically and internationally. Alupo says the account in reference was opened on December 17, 2003 on the instructions of Ministry of Finance Planning and Economic Development (MoFPED) in the Deutsche Bank in Germany.

She says the purpose of the account "was to receive proceeds from the sale of shares in DFCU Bank by a German company called Deutsche Entwicklungs  Gesellschaft (DEG), which until then had been a shareholder in DFCU Bank", adding that "the funds had been designated as a grant to the Uganda Government". 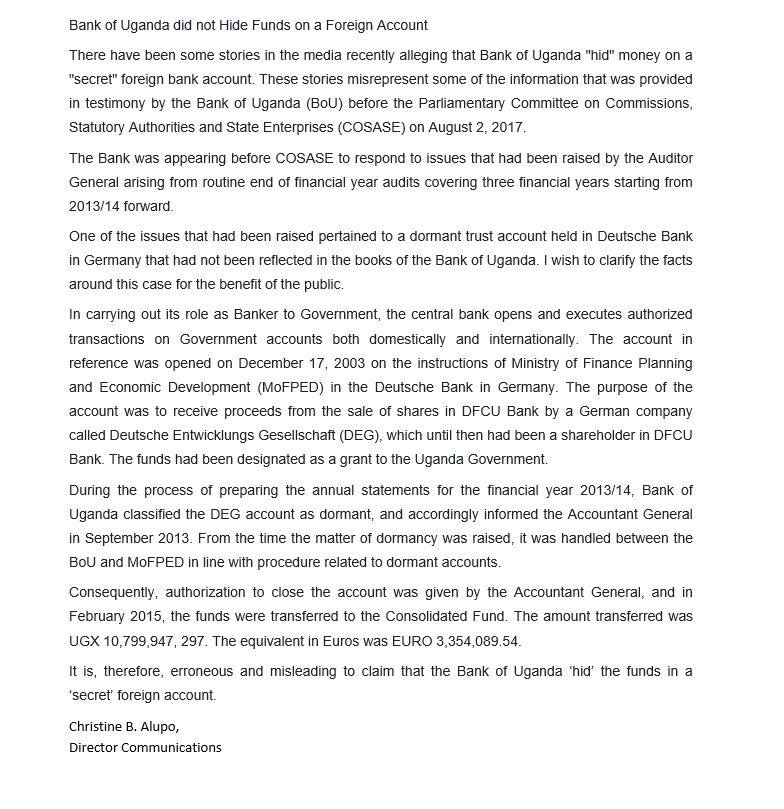 Alupo explains that "during the process of preparing the annual statements for the financial year 2013/14, Bank of Uganda classified the DEG account as dormant, and accordingly informed the Accountant General in September 2013.  She says "from the time the matter of dormancy was raised, it was handled between the BoU and MoFPED in line with procedure related to dormant accounts".

Alupo claims that consequently, authorization to close the account was given by the Accountant General, and in February 2015, the funds were transferred to the Consolidated Fund.  She says the amount transferred was Shillings 10.7 billion , the equivalent of 3.3 million Euros.

The BoU communications chief concludes that it is "erroneous and misleading to claim that the Bank of Uganda 'hid' the funds in a 'secret' foreign account". The report comes at a time when the central bank and businessman Sudhir Rupareila are in court over the closure of Crane Bank. 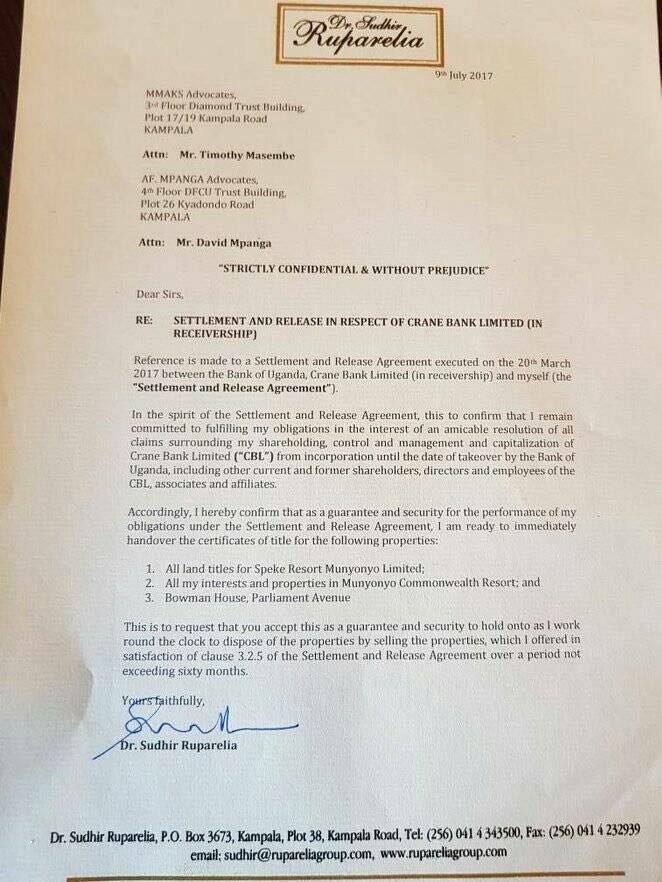