Christina Milian has finally confirmed her long-rumoured relationship with rapper Lil Wayne, who reps her on his label Young Money Entertainment.

The two-time Grammy nominee and her 32-year-old beau were spotted getting cosy at the Floyd Mayweather vs. Manny Pacquiao boxing match in Las Vegas Saturday. 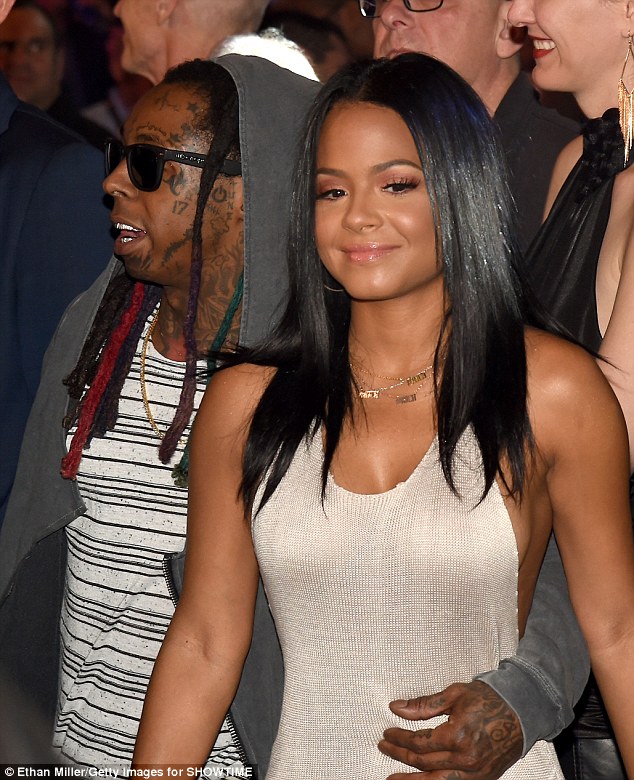 'He's very special to me, yeah': Christina Milian has finally confirmed her long-rumoured relationship with rapper Lil Wayne, who reps her on his label Young Money Entertainment

Christina has been playing coy about the four-time Grammy winner - born Dwayne Carter, Jr. - as far back as July.

Weeks earlier, the Turned Up star had split with her live-in fiancé Jas Prince following a 14-month engagement.

Milian - born Flores - made the loved-up confession while promoting her new music video Rebel, which was inspired by their love.

'It's safe to say it is about the man in my life, yes,' she confirmed of the auto-tuned, R&B slow jam.

'For me, I'm so inspired by the relationship that I'm in that it's definitely an experience. It's that careless, hopeless, romantic love - that feeling of "I will do anything for you" and it's just incredible and so yeah, "rebel for you" means "I'm all about you." We love that!'

The single mother-of-one gushed: 'There's nothing better than that feeling of new chemistry when you're so into someone and you could care less about what anyone else thinks... and there's butterflies! It's a real feeling that people experience.'

However, the former Dancing with the Stars contestant stopped before discussing marriage with the father-of-four.

'You never know, I mean, love does inspire beautiful things like that,' Milian smiled.

'I don’t put too much pressure on one thing but I’m just living freely with him and we’re both very happy.'

The Emmy winner also revealed that Wayne will rap on a song called Do It on her five-song studio album - her first in nearly a decade.

'This is probably my favorite look,' Milian said of the red bob wig coiffed by Randy Stodghill.

The former Voice social correspondent has a five-year-old daughter Violet with ex-husband The-Dream aka Terius Nash.

The amicable exes famously divorced four years ago after the five-time Grammy winner cheated on her with his assistant back in 2010.