January 23, 2015- Singer and Red Card Campaign Ambassador Irene Ntale last night unveiled her new song, “Think of Me”, that carries the don’t-drink-and-drive message to her fans as they partied at Club Gabiro in Bugoloobi, Kampala.

“Every time you listen to this song, be reminded about life and things or people you hold dear. I hope that in doing so, you will always make the right choice. For example, after enjoying drinks on a night out, get a friend or grab a cab to take you home safe if you are drunk," -- she added.

Think Of Me, which falls in the Afro-Pop music genre, was produced by Swangz Avenue, a Muyenga-based music production house to which Ntale is signed. The great lyrics to the song were penned by Ray Signature, who also wrote Ntale’s hit songs; Gyobera and Olindaba. 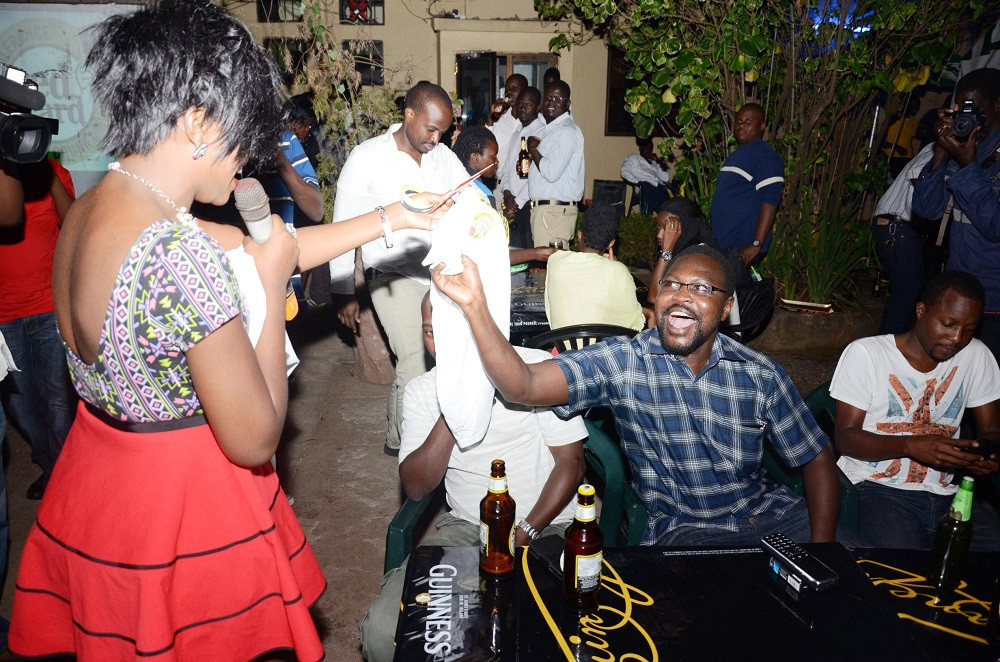 After launching the song, Ntale encouraged her fans to sign pledge cards and become ambassadors against drink driving. She also gave Red Card branded memorabilia to those in attendance and shared photo moments with many of them in honor of their decision to associate with the campaign.

A 10 man crew from Swangz Avenue graced the event to give their counterpart Ntale moral support. Also in attendance were; UBL staff, corporates, civil servants, celebrities and renowned city socialites.

Ntale was unveiled by Uganda Breweries as the campaign ambassador on December 22, 2014 in an effort to lend support to all other initiatives aimed at reducing road accidents caused by irresponsible drinking habits especially around the city during the festive seasons.

UBL has run the Responsible Drinking campaign for the last seven years in partnership with the Uganda Police Force because of its effectiveness in delivering the message against drunk driving to society and the positive response it has received. An evaluation report of last year’s campaign carried out by Millward Brown, a global communications firm, shows that the campaign created huge awareness on responsible drinking.

Azawi is Capable of Winning a Grammy Award - Lucky Mbabazi

Azawi is Capable of Winning a Grammy Award - Lucky Mbabazi

IGP condemns murder by mob of police officer in Kamuli

Teenage Pregnant girls in Otuke to be allowed back to school