Woman Gives Birth to Twins, Names them Donald and Trump

A woman from South Carolina who made headlines when she gave birth to twin boys at Grand Strand Medical Center and named them Donald and Trump says she has no regrets for giving them those names. The proud mum said:

“We weren’t planning on naming them after Donald Trump at first, but it is clearly a divine sign that our next president shows up in our state on the day my little sunshines are born” explained Latifa Huxley, proud mother of the two.

“Donald Trump is a bright and successful man with strong moral values that represents what America is all about.” she told local reporters, visibly emotional.

The family strongly believe the timing of the South Carolina GOP primary with the birth of their twins in February was no coincidence. 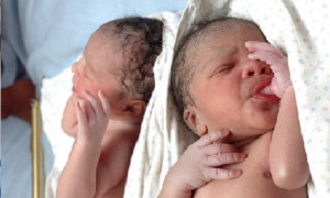 “It is truly a blessing and a God-given sign”. “After all the division Obama has brought upon this country, it is a great privilege to have my children born on this auspicious day,” he explained with pride.

“I don’t care if my president is black or white, all I know is that Trump is a man of his word and we believe him when he says that he will make America great again,” he adds.

Not performing in the UK doesn’t bother me - Fik Fameica

He said many people are involved in family wrangles, but they are good at criticizing him.
Story by Howwe
\ 1659991053

Singer Lydia Jazmine was locked out of her YouTube account and the channel's name changed to MicroStrategy by crypto scammers.
Story by Businge Brian Franco
\ 1659960028

Renowned actress Faridah Ndausi opened up about her failed marriage with Omulangira Ndausi.
Story by Howwe
\ 1659908827

Burna boy rules out any show in Uganda

He was allegedly scheduled to perform at Kololo Airstrip in December this year.
Story by Howwe
\ 1659773544

'We Hire Musicians that People Want to See' - Alex Muhangi

Comedy Store boss Alex Muhangi has defended the promoters’ decision, claiming it is what people ask for.
Story by Howwe
\ 1659682931

According to police, Orec was recklessly riding a motorcycle along the Akokoro-Apac road when he was stopped by two traffic officers on duty.
By Businge Brian Franco \ 1660318140

The deceased is Daniel Agama, a mentally impaired resident of Nakamini village, in Namalemba sub-county, Bugweri district. The suspect, whose particulars have been concealed for the purposes of aiding investigations, was guarding Naigombwa Seed Secondary School at the time of the incident.
By Mukama Evart \ 1660309191