The 2-month promotion that was launched on July 26 has seen and continues to see over 100 customers, including Nuwamanya winning Shs.3 billion worth of prizes such as plots of land, vans, motor bikes, flat screen television sets and airtime.

Nuwamanya a first born in a family of 5 from Masindi district also a customer of UBL’s Tusker Malt Lager unable to afford tuition fees for a while now was over the moon after receiving a call from UBL telling her that she had scooped herself a plot of land in Kampala from the promotion.

“Since this promotion started, I have been drinking a few bottles, also collected a few bottle tops and used them to send codes to 6050 with hopes that one day I would win. I wanted the land and thank God, I have finally won it.” A visibly excited Nuwamanya who travelled with her guardians here in Kampala said.

She thanked UBL for making her journalistic dream come true and encouraged people to participate in the promotion.

“I didn’t believe it when I got an SMS neither did I believe it when I received that call but when I came here today, I saw with my own eyes. I will sell the land, start up a business and be able to pay my tuition. I encourage people to participate because tomorrow maybe you walking away with an even bigger prize.” Nuwamanya concluded. 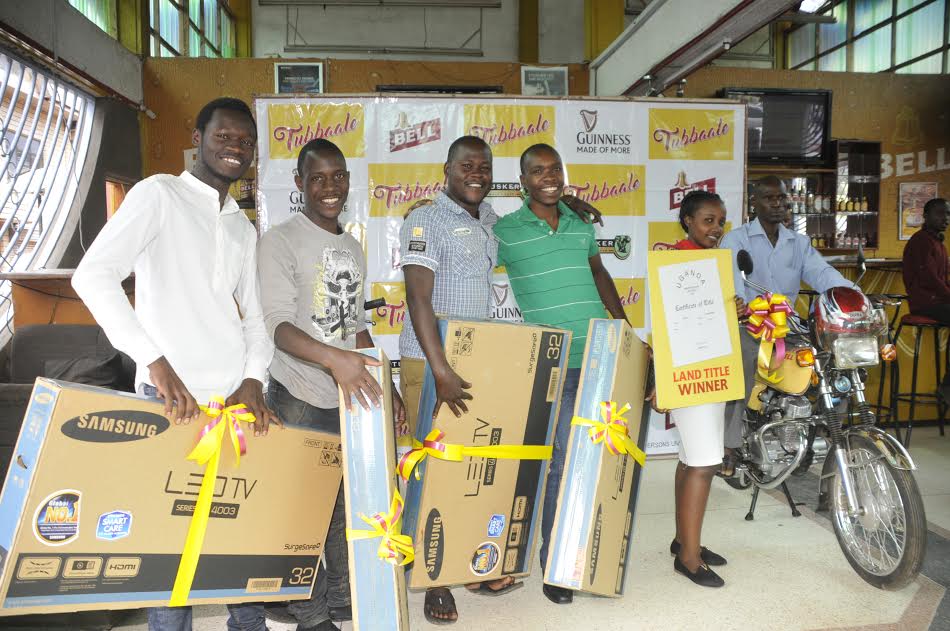 Brian Seruyiggo, Customer Marketing Manager-Bell Lager while handing over Tubbaale goodies at Lambertini, UMA Showgrounds yesterday encouraged people to participate in the promotion because there are still lots to be won before the grand finale on October 2nd at the Kampala City Festival.

“We still have lots of motor bikes, flat screen TVs, plots of land and vans to be won. To participate in the promotion, buy either Bell Lager, Tusker Malt Lager or Guinness, check under the crown for a code and SMS it to 6050 and stand a chance to win! In addition to that, we are giving away a van in a raffle draw during the festival. To stand a chance and walk away with the van, go to National Theatre where the Bell stage will be located, buy a Bell Lager and participate in the draw. However, don’t forget to drink responsibly.” Brian concluded.

Some women Learn to  bleach from their mothers - Lydia Jazmine

I’m Having The Best Time of My Life — Flavia Tumusiime

Africell ending Mobile Services in Uganda.Here's what you need to know