Jail Taught Me A Lesson, My Children Are My Priority — Stella Nyanzi

“Jail does things to a soul. In this regard, my children are my priority”, says Stella Nyanzi

Makerere University lecturer Dr. Stella Nyanzi, who slept thirty-three days in jail for criticizing the President Museveni’s regime in the famous “PAIR OF BUTTOCKS” Facebook post, has come out to say she LEARNED A LOT WHILE IN PRISON. In the recent Facebook post, Stella says she has given up on fighting for a common person and it’s high time she concentrated on her family.

In the recent Facebook post, Stella says she has given up on CLASHING with the regime and that it’s high time she concentrated on her family.

“Jail does things to a soul. In this regard, my children are my priority”, she says

She further says she has gone through serious counseling which has enabled her to be a better person lately.

“I got a six months' fellowship. It was very good. It was time-bound.”, she continued to say.

People can be strange. They ask me what happened to the sanitary pads campaign. They ask me whether the government bought my silence and inaction. Some head teachers of schools from rural districts call my phone number to ask me when I will be taking sanitary pads to the schoolgirls in their schools. People ask this and that...

Often, I tell them that I took a break from the sanitary pads campaign, after spending thirty-three days in jail. Sometimes I tell them that I gave birth to only one daughter who has never missed a day of school because she lacked menstrual hygiene materials. Sometimes I am too shocked at their rude intrusion to respond in any meaningful way to their queries. You see, I stopped giving a fuck!

But the more I think about the sanitary pads campaign, the more I celebrate it. Using the free-will donations of ordinary people, our campaign challenged the dictatorial leaders of this god-forsaken country. We questioned the lies about promising sanitary pads, the lies about lack of government funds to provide sanitary pads, as representatives of the manifold blatant lies told to Ugandans. We also boldly bought sanitary pads and distributed them to thousands of schoolgirls. We showed it can be done, where there is a will.

It should be noted, before her arrest, the activist spoke to Women & Girls about her determination to hold the government to its promise of free sanitary pads for the country’s schoolgirls.

Here is the snippet of one of the comments from her followers. 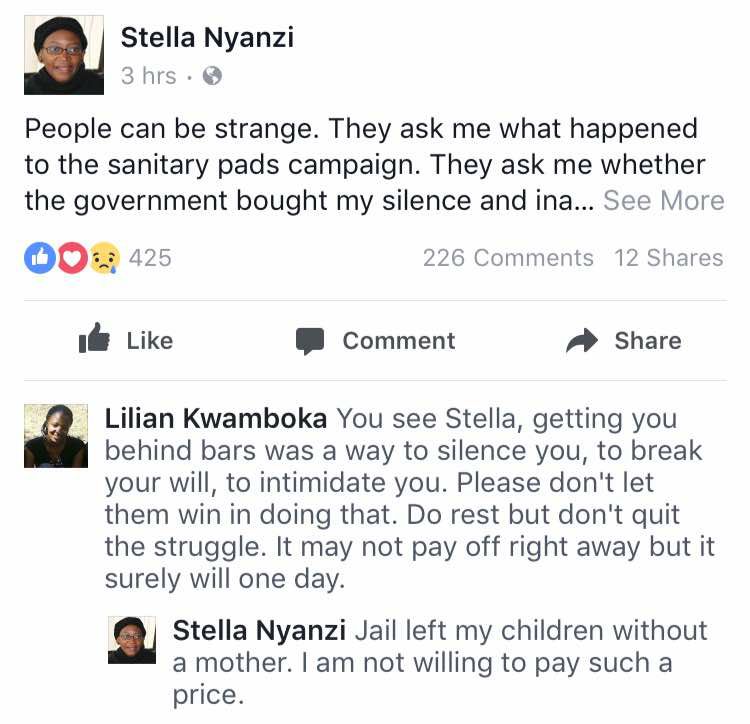 Sandra Teta Leaves Weasel, Returns to Kigali With the Kids

Fans voiced their opinions through social media saying that giving Weasel a platform facilitates his domestic violence.
Story by Howwe
\ 1660197203

I want to get married - Spice Diana

Despite being linked to her manager, Rodger Lubega, Spice Diana has always been secretive about her love life.
Story by Howwe
\ 1660116820

Veteran singer Henry Tigan has now come out and asked those close to Weasel to help him get counselling.
Story by Howwe
\ 1660114900

Troubled musician Weasel Manizo has asked socialite Judith Heard to stay away from affairs regarding his family.
Story by Howwe
\ 1660076584

He further explained that she also insulted officers when she was asked to leave the premises.
Story by Howwe
\ 1660075880

According to police, Orec was recklessly riding a motorcycle along the Akokoro-Apac road when he was stopped by two traffic officers on duty.
By Businge Brian Franco \ 1660318140

The deceased is Daniel Agama, a mentally impaired resident of Nakamini village, in Namalemba sub-county, Bugweri district. The suspect, whose particulars have been concealed for the purposes of aiding investigations, was guarding Naigombwa Seed Secondary School at the time of the incident.
By Mukama Evart \ 1660309191