We are yet to see another battle for who owns the man. Singer Mariam Ndagire is finally pregnant again.

We have been informed that the man responsible is city Cassanova John Segawa. There is a saying which states that, where the water had passed, the possibility that it will pass there then again are high.

Mariam has a child with John at the same time with Ruth Wanyama who happens to be former friend with Mariam. When they both found out that he was playing them, they began fights, dissing songs were exchanged. John Segawa tried to calm down his women. 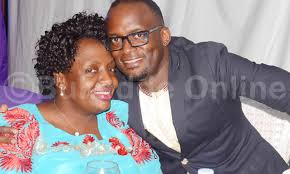 But Mariam’s pregnancy wouldn’t be good news to Ruth Wanyama who, of recent has been friendlier with John. She actually spends much time in Wakaliga Rubaga where John’s offices are.

We will keep you posted.

Parliament orders for the arrest of socialite Bryan White